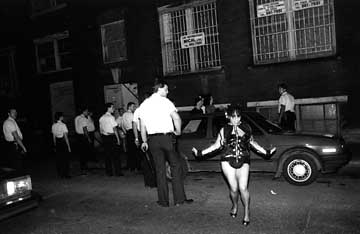 The first thing I encountered when I emerged from the party was a cluster of police officers facing the only exit door. Estimates range from 32 to 40 cops- and 16 police vehicles from the Main Station and Station 25... which was a police station from outside of the area. People from the party were overwhelmed by the unexpectedly large police presence and reports of the brutality which had occurred. Some fled immediately, but others watched transfixed as the police regrouped in battalion formation, effectively blocking off exits and access to cars and bicycles. At this point the police were still wearing their identification badges, seen pinned on their left hand shirt pockets. They advanced on us, sticks in hand. I was in an awkward position as I was carrying only a 28 mm wide angle lens, which required that I come in quite close to my subjects in order to get any detail! My flash batteries were also dying, so I had to wait between recharges in order to take another shot, and, of course, every time I did, my location was instantly recognizable... I was the only photographer present, so I felt it my responsibility to document what was happening, but my friends were understandably anxious for me- and the film!

The advance stopped- and the heckling began. Police yelled homophobic insults at the crowd of mostly gay people, such as, "Suck my cock, faggots!" while they stroked their sticks- giving one the impression that homophobia might be the... cause of this undue police reaction to a party in an uninhabited section of the city? Lack of neighbours suggest that it wasn't the result of a noise complaint, although afterwards I heard police claimed that,(A) They'd received an anonymous noise complaint (later disproved by lack of 911 reports) and (B) The party organizers themselves had asked for police help as the party was out of hand??? (Hardly.) The final excuse forwarded was that illegal alcohol was being sold, but this was never proven and doesn't explain why the police left the party, to wait outside en masse. A girl later claimed to have overheard a cop speaking about it in a donut store. He had allegedly expressed frustration in that as urban rather than SQ police,they "couldn't GET the Indians,"(in reference to OKA)... and perceived of gays as an easier and more accessible target. Rumours and stories abounded after Sexgarage.

The crowd, believing themselves under attack for their sexual orientation, shouted back, "We're here, we're queer, we're proud of it!" etc. and two men allegedly exposed their buttocks to the cops...(ok,it did happen!)The outcome was that the police began to remove their identification badges in front of us. It was strange to watch them eying us as they did this, and suddenly realizing what they intended. (It is illegal, by the way, for them to remove their IDs- though the beating of citizens appears to be permitted- in any event, they got away with both.) The cop, to the right in the picture below, seemed transfixed by me for some reason. We stared each other down until his comrades, fearing either for his psychic or psychological welfare, suddenly grabbed him and removed his ID badge for him. One would have thought them drugged, to judge by their expressions. 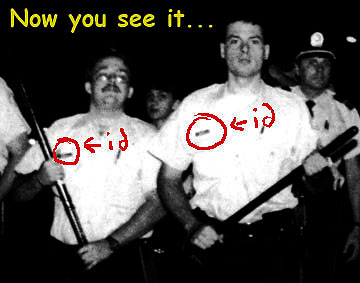 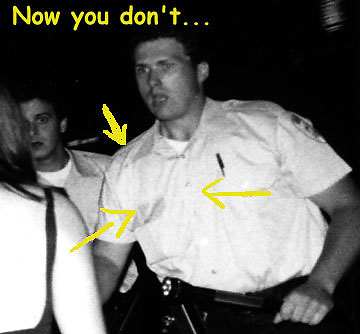 Then they ran at us, herding us up the hill and beating us with their "matraques", as they are called here. Wendy Stephens (foreground below) turned and ran, but the cops knocked her feet out from under with their sticks and she hit her face on the ground.

Wendy told me afterwards that a group of them would lean over her when she fell, sadistically whispering, GET UP! RUN! RUN!, only to knock her feet out from under once again as she scrambled to get away... repeatedly, she landed on her face. 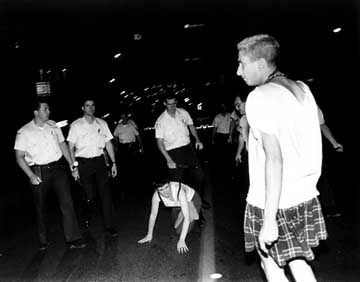 Someone at the Montreal Gazette chose to label this photo, "Partygoer sprawled on the ground," when they published it the following day, which didn't indicate how she arrived in that position and somehow introduced the notion that- partying?- might be responsible? It also didn't indicate her gender- I somehow think that the general public may have been more disturbed if they had realized that it was a female on the ground being beaten by the assortment of male police gathered round.

I had given the first two rolls of film to a friend for safekeeping, as I felt my identity and position too obvious. I was on my third roll- which contained the most incriminating photos, and was wondering by then WHY they hadn't stopped me yet... I suspected that the police may have speculated that I could be taken at any time, and I may as well provide THEM with the documentation. I arranged to have a friend with a bike on stand-by, to take away my last film if need be, which was still in the camera. 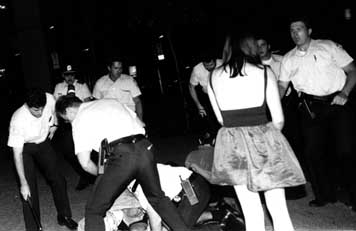 The last photo I took that night. The police were beating a man to the left(under the crouching cop), holding a stick at the head of a butch woman in the center - whom they had forced on her knees, and were shouting at another woman on the right.

Note that the only cop still wearing his ID is holding a megaphone and shouting directives, not engaged in the beatings (second from left in rear).

At this point, I found myself falling. As they say, I didn't know what hit me... I remember wondering, "Why am I falling? I don't recall tripping over anything..." but witnesses later told me that a cop had run at me from behind and knocked my feet out. I had then been struck in the vicinity of my chest area, where I was holding my camera. Fortunately, the camera strap was not around my neck, as had it been, what followed may not have been possible to execute. My only thought as I fell was to protect my Nikon from damage, and I landed awkwardly on my elbow in an attempt to cushion it. I twisted my body, away from the cops I'd been shooting and towards the hill and the fleeing crowd. From my perspective on the ground, all I could see were feet running by and general commotion- whether they belonged to friend or foe was impossible to distinguish. At this point, I had no choice. I steeled myself to the notion of losing my beloved Nikon FM, convincing myself, "This is no longer a camera- it is a box with film in it", and slid-threw the camera up the hill as far away as possible, shouting at anyone who might hear (and hopefully not a cop), "GRAB THE CAMERA! RUN!" Then I waited for the inevitable impact of the police, whom I knew were directly behind me... but- nothing! Witnesses told me that when I had thrown the camera (or as a result of the second hit), my Vivitar 285 flash had dislodged and gone flying in the opposite direction- towards the curb and the police huddle! The cops had immediately abandoned the guy they were beating and 6 of them had allegedly pounced on my flash- which I imagine they took to be the camera! That explains why I was left to my own avails for so long.(Moments are extended in these situations!) I lay there, looking up the hill, wondering sadly if I would ever see my camera or the film again. Then I saw a man I knew to be a journalist smiling at me! "What's he got to smile about," I thought somewhat crossly, "This isn't exactly funny..." and I suddenly realized that he was gesturing towards something dangling from his hand- it was my Mickey Mouse camera strap!!! Even at this distance, the pattern was distinguishable! I ran towards him, and he nervously handed over that which he obviously wanted no further possession of... (Understandably! I didn't want it at that particular moment either!) Fortunately for all, my trusty friend on the bicycle, Darryl, showed up. I handed the camera over and told him to meet me with it at home- and the film was saved!