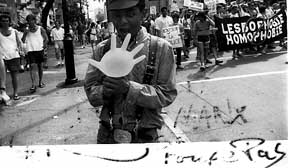 BACKGROUND: I was originally asked by a staff member and friend at Les Vivres, a vegan cafe in Montreal, to exhibit my photographic work which dealt specifically with the issue of police violence. I proposed two series- both of which were of incidents which had occurred 10 years before- Oka, and Sexgarage. During the weekly meeting at Les Vivres, the co-op agreed to exhibit the work. The exhibit was up for two weeks before the first attack on my photos. During this period, I was unaware of an internal controversy surrounding the exhibit. In fact, I was told that it had received compliments as the first art exhibit at les Vivres to display an element of professionalism. The photos had also received media attention, from which the cafe had benefited.

Last week (Aug., 2000) my Sexgarage exhibit at les Vivres was subject to an attack by someone wielding a Sharpie to one of my Sexgarage photos and the introduction page near the door... one comment read, "remember sick (misspelled)"- The other was in French and now illegible as the staff had unsuccessfully attempted to remove it from the glass. I wondered how this could occur in a peaceful veggie restaurant, and that no-one had seen who had done it. 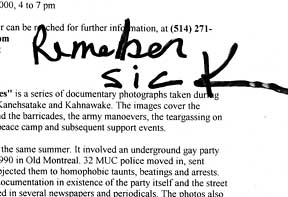 Today (Tues.Aug.8, 2000, 5 pm) I passed by the cafe, and was told by Chris that my exhibit was "down"- not all of it, mind you - the Oka part was still there. Someone had REMOVED my Sexgarage installation from the 2 walls it occupied, on Gay Pride day, no less! A further irony- I had just returned from Ottawa, having been voted Secretary to the Federal Council of the Green Party of Canada. Another irony, my vegan friends. This was NOT the welcome I was expecting to come home to.
The attack had happened on Sunday morning, Aug.6, sometime after 1 am. I asked who had done it- and was told that the unofficial word was "Dominique"- a guy who provides the cafe with organic food. I asked WHERE my work was and was told, "I think (!) it's in the back." We went through the kitchen to a shed in the back and there in a dirty box which contained twigs and dirt and the odd organic potato, was my 22 photo exhibit- water damaged, glass broken, caked with dirt, crumpled and one art piece missing- the ceramic plate with a photographic image of male bums on it- the Sexgarage dancers...

Evidently, no-one had thought to inform me. How did he get in? Through the back? Did someone with a key let him in? No answers. No-one had checked my photos to see what he had done with them, or they might not have left them in a damp shed where potatoes and a wet floor could wreck them... no-one at the regular meeting on Sunday had considered, perhaps, putting them BACK on the wall??? Instead, someone had put up a poster in its place on the wall- which professed to believe in love and tolerance as it depicted 2 persons of different racial backgrounds (but opposite sex). I ripped it down and told them they should address my issue first. Except for Chris, who is a saintly and truly tolerant creature with green hair who presides over the bunch, the attitude of the staff was decidedly hostile in the face of my evident anger. I should be "cool" about it. Right.

This is a homophobic attack, a blight on the rights of artists and freedom of expression, and should not be tolerated in a democratic society. A lot of people suffered greatly as a result of the original incident- which means that these photos represent more than the loss of darkroom time, money and irreplaceable images. It is an attack on the right to express difference.
I have personal reasons to believe that these images represent more than mere face value considerations. As a direct result of the photos I took at Sexgarage, I was beaten twice by the police in 2 days, lost equipment, was subject to arrest in two separate incidents (including a false arrest, during which I was briefly "charged" with "Conspiracy to commit armed robbery" by the MUC),threatened, followed, intimidated and finally after all this, compelled to pay a fine. For managing to document a human rights violation. Now, a pseudo-peace-loving asshole with a pathological issue with gays, who has since treated himself to a little holiday at the "Rainbow festival" after executing his attack on my work, thinks I need to deal with him too? And I should be cool about it? NO. I think he should answer for this, and also anyone else who helped him. What is the Cafe Vivres going to do about it? Continue to allow him to supply them with organic produce? How about an official apology? And some answers. I am disgusted. And NOT cool about it. Sorry. So glad he didn't have an issue with Natives as well. He left their images up on the wall. I haven't yet decided whether I should remove my work entirely from the premises, or leave the gap there as a reminder until the show is scheduled to end Sept.1.
It is now Aug. 14th and I have heard that Marie-Pierre, the owner of Vivres, has finally returned from hiding, according to some of the staff, and has allegedly written me a letter. I have yet to see it. Today I spoke to CKUT about this and the Mirror as well. I took down the Oka part of the exhibit, to protect the work from further abuse, and will exhibit it on the web rather than seek another location.

I never did receive the letter from Marie-Pierre or an apology from Les Vivres. Marie-Pierre then confided to mutual friends that she actually "admired" the man who had perpetrated the attack, for being an "eco-terrorist" and going ahead with what he believes in. (Even when that includes hatred towards gays?) Too bad that his lofty "beliefs" didn't include respect for my rights as an individual artist, or the rights of the gay community...
My missing plate was finally was returned to me, but no compensation offered for the damage done to my work.
The police did nothing, other than phone me up and suggest that other people might find my work offensive. The police also conveniently lost my original statement, and when they had translated it into French, omitted the names and contact information of the witnesses involved.
I am calling for a continued boycott of Les Vivres vegan restaurant in Montreal. It's rather ironic that a group of people professing to represent enlightened ideologies and sheltering beneath the moral banner of veganism, wouldn't recognize such actions in their midst as reflecting a state of absolute hypocrisy.
Les Vivres eventually changed the name of their restaurant. This page will remain up, as long as there are hypocrites masquerading as crusaders of change, and until I receive both an abject apology and compensation.